Some reality stars set high standards! Sean Lowe and Catherine Giudici, the adorable couple from ABC’s The Bachelor, wait for sex until their wedding day.

I was ecstatic when I saw this magazine’s headline at Walmart last week! Knowing how the entertainment industry likes to polk fun at anyone NOT having sex, this was very refreshing! Sean Lowe has had some time in the hot tub with different women in this year’s Bachelor saga series along with some kissing sessions back to back. I WAS excited to see that there was no hot steamy sex as Hollywood likes to portray without the STD, guilt situations that follow. 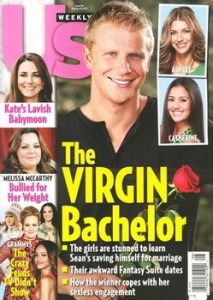 Sean states that he made some bad decisions during his college years of having pre-marital sex with women, but now as a Christian, he takes his faith seriously. No hanky panky until the wedding night! Way to go buddy!

Past bachelorette star Jillian Harris tells fans that she believes it’s not a good idea to skip sex before the wedding night saying it’s a huge part of the relationship. Well we all know how her story ended with Ed, so I wouldn’t take her advice. I waited until my wedding night and married a man like Sean. Luke, a rededicated Christian who made a promise to God that he was not going to have any more sex until he got married.  He waited many years until I came along.  Everyone has the opportunity to start over, to be forgiven, and to make better choices. Believe it or not, if Sean and his woman do wait, then this couple has a good chance of actually staying together forever like Trista and Ryan from a decade ago. I’m rooting for Sean and his bride to be…which we will find out who that lucky lady is this month!  Don’t let Hollywood tell you that virginity is a waste.  It’s like opening a Christmas present 6 months early…no fun.

In fact, here is an example of of a celeb who wanted to wait until her wedding night and didn’t. Her regrets of this turning point in her life are revealed on prime time.